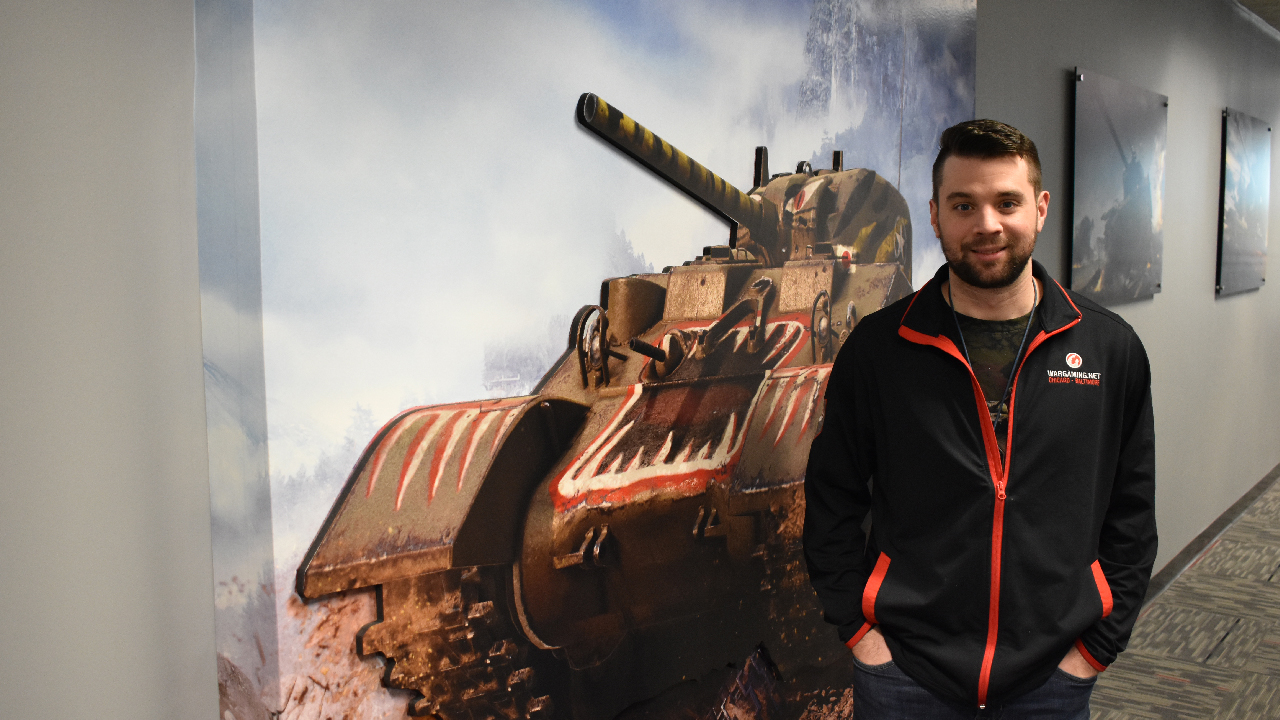 Thanks for taking the time to talk to me today. To start, what do you do at Wargaming?

I am a Game Designer at Wargaming, and right now, I focus on the vehicle side, mostly working on tanks- making sure that they’re set up, are balanced correctly, and the camo looks good on them, a lot of things like that.

How did you end up at Wargaming?

In college, I studied English because I wanted to be a writer then switched to English Education for more job security.  I was finishing up school in 2012, and I was doing the student teaching thing and I decided I didn’t really want to be a teacher- I enjoyed it enough, but your heart really needs to be all in to really do that properly.

I knew I always wanted to be in games since it’s always been a big part of my life, and I still had the innate desire to create something. If I wasn’t going to work on a book, then hopefully it can be a game. So, when I moved here after college, I pulled up every studio in Chicago imaginable, and I refreshed job boards every single day until one of them had an open position; at the time that was Day 1 Studios.

I applied, and they called me in. They asked me if I knew anything about World of Tanks, and I said, “I honestly never even heard of that game”. I’ve always been a console player, so I didn’t really follow the big games on the PC at the time.

The QA manager at the time said, “This is confidential information, but we were just bought up by Wargaming, and we’ll be working on the console version of World of Tanks”.

I said that I thought that was cool, and they gave me a chance as an entry level QA tester.

So how did you end up in game design with relatively no background in game development?

So for entry level QA, the first thing you really need to learn is the language for the game development process, so that’s what I focused  on. I was in a QA role for about a year before I was given the opportunity  to take on some leadership responsibilities. Previously, I was in the National Guard for about six years, and I had some exposure to different leadership and management styles; that experience, I think, helped me move on to be a QA Manger.

Ultimately, I started to do less direct testing and more managing. I was a QA Manager for a year and a half or so, and in that role, I jumped back and forth between the development and the live services of the game. Through that experience, I got to see the process of each update from development to deployment and finally how it exists in players’ hands in live mode.

Those two services, development and live ops, work hand in hand, and I was fortunate enough to jump in between them in the role. That experience helped me go into design because not only did that show me how we wanted things to work in the game, but it also allowed me to better understand how players want to interact with our game. I was always interested in game design; learning to incorporate and analyze player feedback was a very useful skill for me to learn.

I expressed to the company that it was always a goal of mine to become a designer. I enjoyed being a QA Manager, but I’ve knew that I’d be disappointed with myself if I never really tried to get into design.

At the time, I was really lucky that one of the designers here started to work with me one on one, and we began to prototype games together - having discussions on a daily basis. So with designing digital games, there’s enough of a barrier of entry that you can get lost in all of the tools you need to learn, and you spend more time learning those tools than actually designing. What the designer taught me was to put learning those tools aside, and instead, we just worked on making board games. With the board games, we designed with physical pieces, and we didn’t need to worry about learning the tools.

So, I would learn about the actual game design portion at work with the help of the designer and learned the design tools when I got home. I think that drastically propelled me to understand what game design really was. I was given the opportunity to move into game design, and now I’ve been in the role for a couple of months.

I know you’re still relatively new as a game designer, but what have you learned so far?

Right now, a lot of it is just learning the core concepts and procedures. I’m getting used to working with some proprietary tools to create and edit content. I think the most important thing is the big shift in mindset. I need to start thinking more like a designer rather than a QA tester. In the past, it was more about identifying problems, and now, I need to think about what we need to do about those problems.

As someone who went from QA all the way to game design, what advice would you give someone looking to move through the game industry?

When I was the QA Manager, we hired a lot of entry level QA with almost no QA experience, and a lot of them didn’t go to school for games-they were just like me and just wanted to work in video games. If you want to get your foot in the door, it starts with being the type of person who is really going to work hard. Then, once you’re brought on to the team, it’s learning more about how the games are made.

As a manager, I ultimately came up with the three fundamental things to gauge what make any employee great. I think if you’re reliable, driven, and humble, you have what it takes to be successful in this industry.

Reliability, at a very basic level is coming into work and doing the things for the job you’re brought on to do. Your team needs to be able to trust that you are able and willing to pull your weight. By extension, if you want to be an artist, designer, or engineer for example, you need to build up the technical skills for those roles and be able to have a conversation with someone who’s in that field.

Humility, is not being a jerk at work because unsurprisingly people won’t want to work with you. You want to be a person that’s respectful to your team and easy to work with. It doesn’t matter if you’re reliable because if you’re a jerk, it always wears on people.  You’ll find you’re less likely to be asked to help out on new projects or new teams.

The drive part I think is what hangs up most new and entry-level people. A lot of people like to say that they’re “passionate about video games”, but the reality is passion is like gasoline, it’s potential energy-it’s not doing anything. Drive is taking the fire to the gasoline- doing something to create an action. That’s where a lot of people get frustrated. They really care about something and want to have conversations to be a part of it, but you have to show that you’ve tried it yourself.

The balance of those three factors, from my experience, determines people’s success in their careers.

What surprised you about the video game industry?

After seeing behind the curtain, when I play games I look at them differently. I think this is something you can’t anticipate because it used to be really easy to plug into a video game and simply play in that world. Now when I plug in, I think about “Oh it’s interesting that they did it that way” or “I wonder if I can break things in this way”, and I think that’s cool. Now when I find something interesting about a game, I ask myself “Why did I find that interesting?”, and so I write it down so I can come back to it later.

What’s your favorite memory so far at Wargaming?

My favorite memory so far is shipping Tanks because I think you’ll always remember when you ship your first game. It was really exciting when we cleared certification [the process of clearing a set of standards from game publishers to reach a certain quality on their platform], especially since I was in QA at the time, you were constantly testing this game in every possible way imaginable. I remember watching the downloads go up and subsequently, the game was breaking in live mode because there were so many people playing. It was a really exciting time at work to watch the number of players go up and for reviews to start getting posted.

Do you have one final piece of knowledge you want to share with people?

I think this is a skill that’s unfortunately being less and less reinforced: don’t ever stop asking why and learning more. There’s definitely a time where you just have to do something because you’re under a time crunch, but when you stop learning and asking questions, you become stagnant. I think a good mental map to follow is to first learn what needs to be done.  Then, learn how, who, when, and where to do it- and finally, learn why it’s being done. I think that’s a really important process for people to move forward and be successful in whatever they want to achieve in the future.

We’re hiring in Chicago! Click the banner below to learn more: 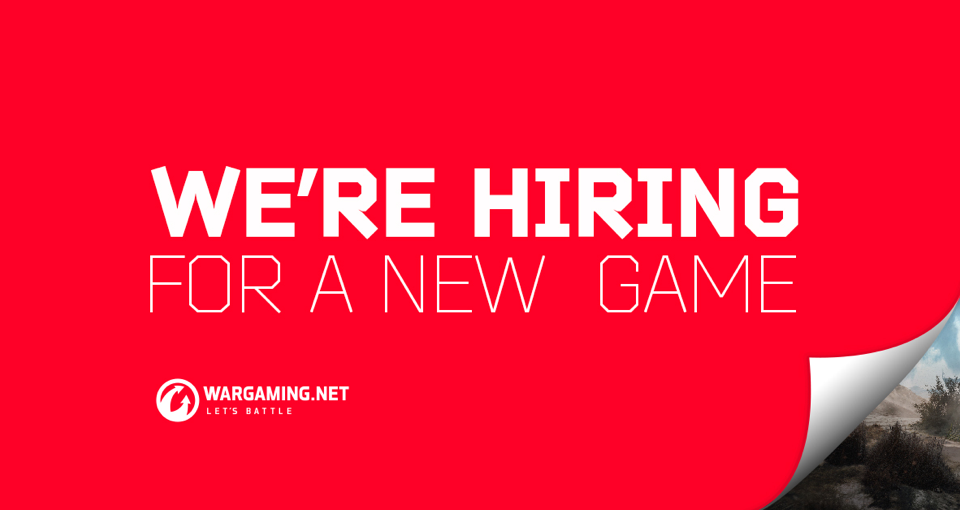 Read our recommended articles from around the site.