Planet Characteristics in Master of Orion

In your quest to conquer the stars, an intrepid explorer needs to know their galaxies and planetary systems so they can lay the foundations for greatness. We’re here to breakdown what types of planets you’ll discover in your journey.

The bigger the better, right?

There are a variety of planet sizes scattered around Master of Orion’s many galaxies, varying in size. However, size isn’t everything, which you’ll discover later.

Huge: The biggest astrological bodies revolving around a star. An explorer won’t find any bigger or better out there. These should always capture your interest.

Giant: Not as big as Huge, but a good find nonetheless.

Large: Third in the list. It’s big. Not as big as Giant. Generally around the size of Earth.

Medium: Explorers should be getting the hang of this now.

Small: The smallest of the bunch, but that doesn’t mean they aren’t rich in resources.

Biome is, basically, the makeup of a planet—what’s there worth taking.

Gas Giant: Full of, you guessed it, gas.

Class A: “Gaia” -- the motherlode, El Dorado—rare worlds with extraordinary rich ecosystems. These should always be your first port of call.

Class B: “Ocean” – planets whose surfaces are mostly covered with large bodies of water.

Class D: “Arid” – Rocky terrain and sparse vegetation not to be confused with…

“Desert” – Harsh weather conditions and very little water are their most common features.

“Radiated” – They do not have atmosphere due to their star’s emissions.

“Toxic” – Totally inhospitable environments. Not a place you want to vacation. 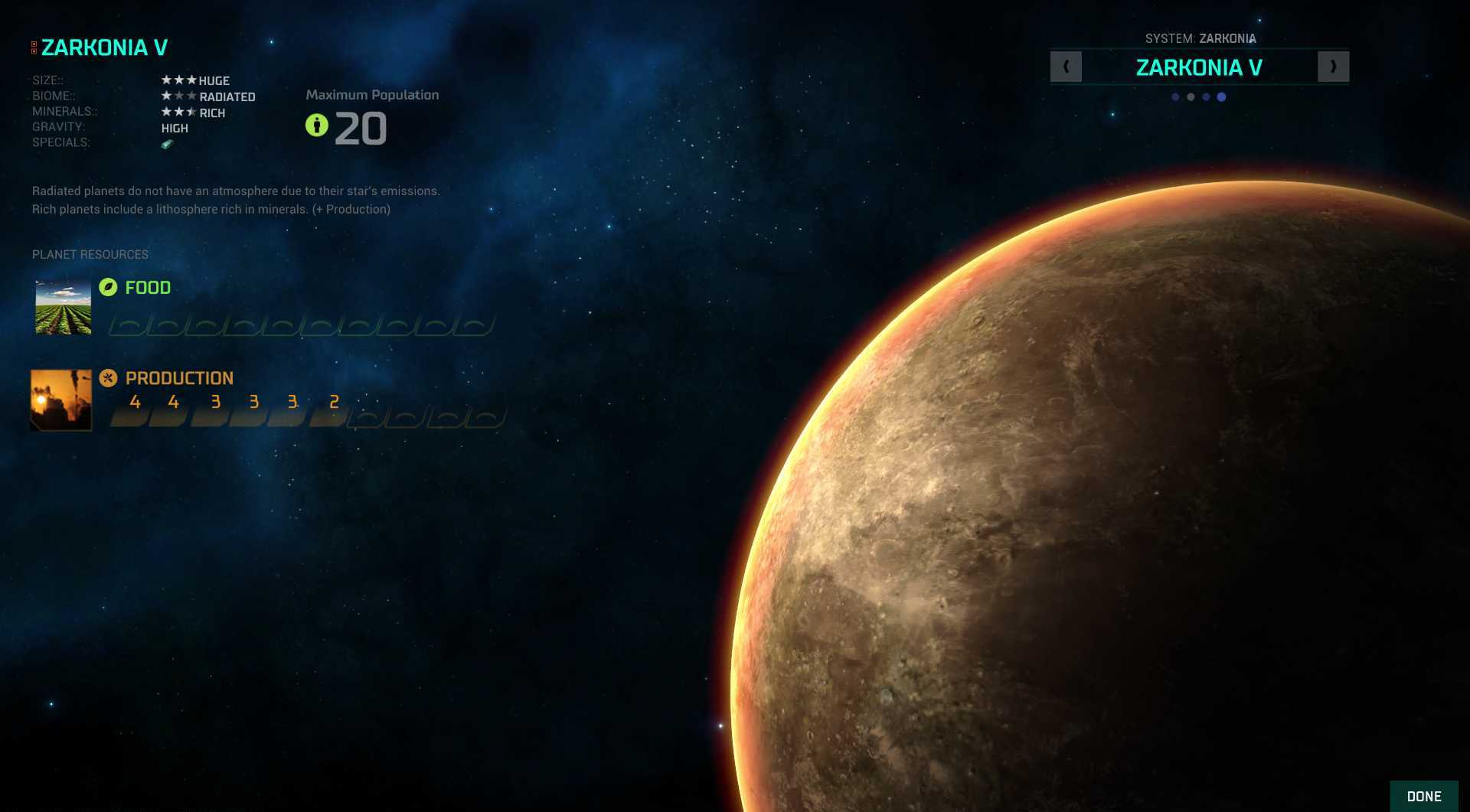 He who controls the minerals controls the universe. Harnessing the power of minerals allows explorers to increase production and kick their campaign into hyperspace.

Rich - they include a lithosphere rich in minerals (+ production)

Abundant – They have an average amount of valuable minerals

Poor – they have some mineral content, but not enough to make them really attractive (- Production)

What also affects the rates of production is gravity, so always weigh the risks and rewards. There are 3 types—normal, high, and low—and this can reduce production up to 50%.

Another vital statistic to bear in mind before colonization is the planet’s gravity. The gravity of a planet can be low, normal or high, with normal being preferable. This characteristic can result in your production being reduced by 50%, which no trepid explorer wants.

The planets of Master of Orion can contain special resources which can help your progress during the fight to become the Orion’s overlord. Keep an eye out for any of the following resources on the planets you find.

For example, Gold can affect your income for the better by giving you extra credits while an artifact will boost the research for the colony.

During your explorations, you will notice that there will be asteroid fields; be wary though, these might be the home to many a pirate, who is looking for any opportunity to loot you.

Hopefully this guide will help you on your way to become the greatest dictator Orion has ever seen.

Stay tuned for more installments to learn even more about Master of Orion!

Don’t forget to check out the official Master of Orion portals for more news:

Read our recommended articles from around the site.